Alexis Ren is an American model and social media star who became a social media phenomenon at 15, when photos of her in a black string bikini posing by the pool went viral on Tumblr. She was Maxim’s cover girl for the August 2017 issue, Maxim’s Mexico cover girl for the March 2018 issue, and Sports Illustrated Swimsuit Issue Rookie for 2018. She has worked for brands including Calvin Klein, Soriya Swim, Forever 21, Puma, Gooseberry Intimates, boost, Monoreno, and Nasty Gal. Born Alexis René Glabach on November 23, 1996 in Santa Monica, California, to parents Cynthia Glabach, a health nutritionist expert, and Frank Glabach, a lawyer, she has two older sisters, a younger sister, and a younger brother. Ren was discovered to model for the label Brandy Melville at the age of 13. She dated Jay Alvarrez from 2014 until 2016. 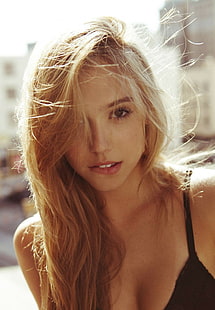 Alexis Ren Education:
She was homeschooled.

Alexis Ren Facts:
*She was born on November 23, 1996 in Santa Monica, California, USA.
*She is of Croatian and German descent.
*Growing up, she took ballet training.
*She began modeling at the age of 13.
*Her mother, Cynthia, died in 2014 due to breast cancer.
*She was named a Sports Illustrated Swimsuit 2018 Rookie of the year.
*She was named in Maxim’s Hot 100 list of Sexiest Women in the World in 2019.
*She is good friends with fashion photographer Bryant Eslava.
*She owns an activewear line called Ren Active.
*She practices Bikram Yoga.
*She currently lives in Los Angeles, California.
*Follow her on Twitter, YouTube, Facebook and Instagram.