Television and film actress, Ali Larter is most famous for her portrayal of the dual roles of Niki Sanders and Tracy Strauss on the NBC science fiction drama Heroes. She is also known for her roles in such films as Final Destination, Final Destination 2, Varsity Blues, Legally Blonde and the 2009 Obsessed. She has made guest appearances in a number of television shows in the 1990s. In Resident Evil: Extinction and Resident Evil: Afterlife, she portrayed video game heroine Claire Redfield. Born Alison Elizabeth Larter on February 28, 1976 in Cherry Hill, New Jersey, USA, she is the daughter of Margaret and Danforth Larter. She was educated at Carusi Middle School and Cherry Hill High She has been married to Hayes MacArthur since 2009. They have two children; son, Theodore and daughter, Vivienne. 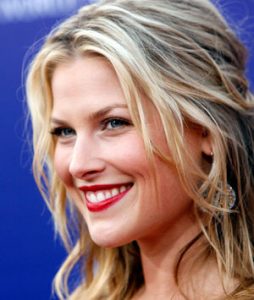 Ali Larter Facts:
*At age 14, she was discovered by a modeling scout.
*She was named number 40 in Stuff magazine’s “102 Sexiest Women in the World” in 2002.
*She was placed #6 on the Maxim magazine Hot 100 of 2007 list.
*She was ranked #19 in FHM magazine’s “100 Sexiest Women in the World 2008” supplement.
*She is good friends with Amy Smart.
*Visit her official website: www.alilarter.com
*Follow her on Twitter, Facebook and Instagram.