Kivanc Tatlitug is a Turkish actor and model. One of the highest-paid actors in Turkey, Tatlitug is the recipient of several awards, including two Golden Butterfly Awards and a Yeşilçam Cinema Awards for Best Actor. He became an established actor, appearing in the television series Kuzey Güney, Aşk-ı Memnu, Menekşe ile Halil, and Cesur ve Güzel. He has also starred in the films Americans at the Black Sea and The Dream of a Butterfly. Born in Adana, Turkey, on October 27, 1983, to Nurten and Erdem Tatlıtuğ, he moved to Istanbul with his family in 1997 because of his father’s health. He has four siblings. He is a 2013 graduate of Istanbul Kultur University. He has been married to Başak Dizer since 2016. He was previously in a relationship with actress Azra Akin from 2002 to 2008. 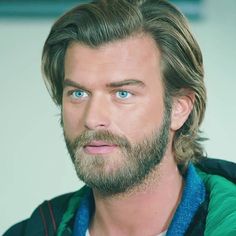 Kivanc Tatlitug Facts:
*He began his professional career as a model.
*He played on amateur basketball teams in Istanbul, and wanted to become a professional basketball player.
*In 2002, he won the Best Model Of The World Award.
*Follow him on Twitter, Facebook and Instagram.