Ali Wentworth is an American actress, comedian, producer and writer. She is best known for playing the role of Dr. Elizabeth Goode, a therapist who treats Hollywood stars, in the comedy Head Case on the Starz TV network. She portrayed the title character in the on the Warner Bros. (WB) series Felicity. Ali has also appeared in such films as Office Space, Jerry Maguire, and It’s Complicated. Born Alexandra Elliott Wentworth on January 12, 1965 in Washington, District of Columbia, USA, to a prominent family, she is the daughter of Muffie Cabot and Eric Wentworth. Her mother worked for Nancy Reagan in the White House from 1981 to 1983, and her father was a reporter for The Washington Post. She was educated at Dana Hall School for Girls and Bard College. She married George Stephanopoulos, ABC News Chief Anchor correspondent and former Political Adviser to the Clinton Administration, in 2001 at the Archdiocesan Cathedral of the Holy Trinity on New York’s Upper East Side. They have two daughters: Harper Andrea Stephanopoulos and Elliott Anastasia Stephanopoulos. The family lives in Manhattan. 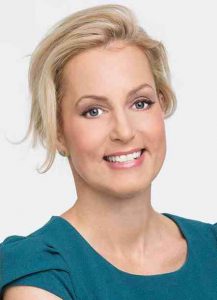 Ali Wentworth Facts:
*She was born on January 12, 1965 in Washington, District of Columbia.
*She is a 1988 graduate of Bard College.
*She used to work as a bank teller.
*She is friends with Jane Kaczmarek and Lee Woodruff.
*Chris Rock is one of her favorite comedians.
*She is close friends with actress Mariska Hargitay.
*Follow her on Twitter and Instagram.