Selita Ebanks is a Caymanian-born British model and actress, best known for her work as a Victoria’s Secrets lingerie model. Ebanks appeared in six Victoria’s Secret fashion Shows from 2005 to 2010 and was a Victoria’s Secret Angel from 2005 to 2009. She has also appeared on the cover of fashion magazines such as Sports Illustrated Swimsuit Issue, Vogue, and Glamour. She has advertised for leading fashion brands such as Neiman Marcus and Ralph Lauren. Besides her career in modeling, Ebanks also pursued her career as an actress making appearances on The Apprentice, How I Met Your Mother, South Beach, “Hawaii Five-O” as well as in several commercials, short films and music videos. Born on February 17, 1983 in Georgetown, Grand Cayman, Cayman Islands, her father is Jamaican and her mother is Caymanian. She was raised with her seven brothers in a large family. She relocated to the U.S. and settled in Staten Island, where she graduated from Curtis High School. She was accepted to attend undergraduate studies at Columbia University and New York University, but instead chose to pursue modeling. She was scouted in New Jersey by an agent from Elite Model Management, in 2000 at age 17. She was in a relationship with Terrence J from 2011 to 2013. 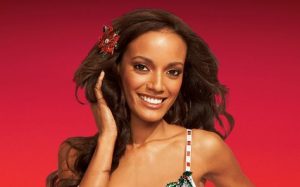 Selita Ebanks Facts:
*She was born on February 17, 1983, in George Town, Grand Cayman, Cayman Islands.
*She moved to Staten Island, United States to pursue a career in modeling.
*She was ranked #63 on the Maxim magazine Hot 100 of 2008 list.
*She was #12 highest paid supermodel by Forbes in 2008.
*She was once engaged to Nick Cannon.
*Follow her on Twitter and Instagram.