Alia Shawkat is an American actress. She is best known for starring as Hannah Rayburn in State of Grace, Maeby Fünke in the Fox/Netflix television sitcom Arrested Development, Dory Sief in the TBS comedy series Search Party, and Gertie Michaels in the 2015 horror-comedy film The Final Girls. She has also appeared as a guest-star in several television series such as Virginia Hall, Drunk History, Broad City, and Portlandia. Born Alia Martine Shawkat on April 18, 1989 in Riverside, California, to parents Dina and Tony Shawkat, Shawkat grew up in Palm Springs. She is of Norwegian, Irish, and Italian descent on her mother’s side, and her father is Arab, from Iraq. She has two brothers. 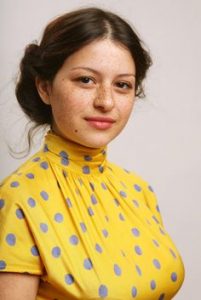 Alia Shawkat Facts:
*She was born on April 18, 1989 in Riverside, California, USA.
*She is the daughter of Dina Burke and Tony Shawkat.
*She is the granddaughter of actor Paul Burke, and step-granddaughter of Lyn Peters.
*She played Maeby Fünke in the Fox television series Arrested Development (2003–06; 2013; 2018–19).
*She is also a skilled pianist, and was an avid horseback rider.
*She is good friends with actress Ellen Page.
*She has a pet cat named Max.
*She is bisexual.
*Follow her on Instagram.