Alice Cooper is an American singer, songwriter, musician and occasional actor. His career spanning over five decades, and known for hits ‘Eighteen’ and ‘School’s Out’. He gained a Grammy Awards nomination for Hands of Death in 1997. Born Vincent Damon Furnier in Detroit, Michigan, he is the son of Ella Mae Furnier and Ether Moroni Furnier. His ancestry includes English, Huguenot French, Irish, Scottish, and Sioux. He has been married to Sheryl Cooper since March 3, 1976. Together they have three children. 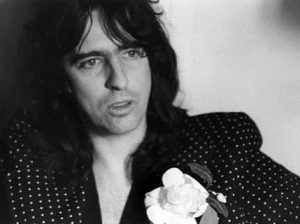 Alice Cooper Facts:
*He became a born-again Christian in the late 1980s
*In 2011, he was inducted into the Rock and Roll Hall of Fame.
*He is a huge fan of the animated sitcom The Simpsons (1989).
*He is an avid golfer.
*Follow him on Twitter, YouTube, Facebook and Instagram.