German-born fashion designer who was the head designer and creative director of the fashion house Chanel, the Italian house Fendi, and the Karl Lagerfeld Collection. He was known for his trademark white hair, sunglasses and high starched collars. Karl was born to Otto Lagerfeldt and Elisabeth Bahlman in Hamburg, Germany, as Karl Otto Lagerfeld. His family belonged to the Old Catholic Church. 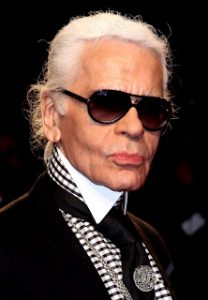 Karl Lagerfeld Facts:
*Son of Otto Lagerfeld, a Swedish businessman who introduced condensed milk to Germany.
*He moved to Paris when he was 14 years old.
*In 2001, he lost 36 kilograms after claiming that he wanted to dress differently.
*He was fluent in German, French, English and Italian.
*He was also a successful and passionate photographer
*Follow him on Twitter, YouTube, Facebook and Instagram.