Actress Alice Greczyn is best known by the public for her roles as Laurie Pullman in The Dukes of Hazzard, as Holly in Shrooms, as Mary in Sex Drive, and as Candice in House of Fears. She played as Madeline “Mads” Rybak in the teen drama television series, The Lying Game, and Sage Lund / Marika in the family drama television series, Lincoln Heights. She was born Alice Hannah Meiqui Greczyn, on February 6, 1986 in Walnut Creek, California, USA, and grew up mainly in the mid-west until finally landing in Colorado. She belongs to European and Asian descent. She has been in a long term relationship with actor Grey Damon. 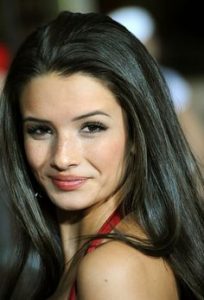 Alice Greczyn Facts:
*She is the oldest of five children.
*She made her screen debut with a role as Linda in 2004’s Sleepover.
*She was a competitive figure skater as a child.
*In 2011, she modeled for Victoria Beckham’s denim and eyewear line.
*Follow her on Twitter, Facebook and Instagram.