American singer whose debut album, ‘Songs in A Minor,’ debuted at number one on the US Billboard 200 and produced the singles “Fallin'”, “How Come You Don’t Call Me”, “A Woman’s Worth” and “Girlfriend”. The album became one of the bestselling albums of 2001, and was certified six times platinum by the Recording Industry Association of America (RIAA) The album earned Keys several accolades, including five Grammy Awards at the 44th Grammy Awards. Her second studio album, ‘The Diary of Alicia Keys’, debuted at number one on the US Billboard 200 chart and became Keys’ second consecutive number-one debut in the United States and spawned three top-ten singles. The album’s four singles, “You Don’t Know My Name”, “If I Ain’t Got You”, “Diary” and “Karma”, reached the top twenty of the Billboard Hot 100, with three of them becoming top ten hits. She is the recipient of various accolades including; 15 competitive Grammy Awards, 17 NAACP Image Awards, 12 ASCAP Awards, and an award from the Songwriters Hall of Fame and National Music Publishers Association. Born Alicia Augello-Cook on January 25, 1981 in Manhattan, New York City, to parents Terria Joseph and Craig Cook, she is of African American descent on her father’s side, and of Italian descent on her mother’s side. She graduated from a performing arts high school at age 16. In July 2010, she married rapper Swizz Beatz with whom she has two sons; Egypt Daoud and Genesis Ali. 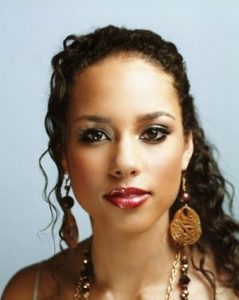 Alicia Keys Facts:
*She was born on January 25, 1981 in Manhattan, New York City, New York, USA.
*She identifies herself as African American.
*She began to play the piano at age seven.
*She wrote her first song at the age of fourteen.
*She is a classically-trained pianist.
*People Magazine named her one of “Breakthrough Stars of 2001”.
*People Magazine named her one of the top 50 Most Beautiful People in the World in 2002.
*She can play the guitar.
*She is good friends with Mariah Carey and John Mayer.
*Visit her official website: www.aliciakeys.com
*Follow Keys on Twitter, YouTube, Facebook and Instagram.