Alisa Kleybanova is a Russian professional tennis player who achieved her career’s best ranking on February 21, 2011, which was #20. Turning professional in 2003 at age 14, she has won two WTA singles titles. She reached the fourth round at two Grand Slams at Wimbledon and Australian Open. Born in Moscow, Russia, on July 15, 1989, to Natalia and Mikhail, Alisa Mikhailovna Kleybanova began playing tennis at age 4. 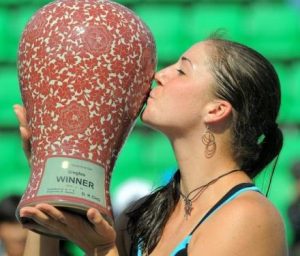 Alisa Kleybanova Facts:
*She started hitting tennis balls at the age of four.
*She turned professional in 2003.
*She speaks Russian, English and Italian fluently.
*Her hobbies include Watching movies, reading books, listening to music and Swimming.
*Visit her official website: www.alisakleybanova.ru
*Follow her on Twitter and Facebook.