Alison Brie is an American actress, best known for starring as Trudy Campbell in the drama series Mad Men, Annie Edison in the comedy series Community, Diane Nguyen in the animated comedy series BoJack Horseman, and Ruth Wilder in the comedy-drama series GLOW. For her performance in GLOW, she received multiple nominations for the Critics’ Choice Television Award for Best Actress in a Comedy Series, the Screen Actors Guild Award for Outstanding Performance by a Female Actor in a Comedy Series, and the Golden Globe Award for Best Actress – Television Series Musical or Comedy. She has also played prominent roles in the films Scream 4, The Five-Year Engagement, The Lego Movie, Get Hard, Sleeping with Other People, The Disaster Artist, The Post, How to Be Single, The Little Hours, Promising Young Woman, Horse Girl, and The Rental. From 2008 to 2009, Brie starred as Rebecca Fuller in the web series My Alibi. Born Alison Brie Schermerhorn on December 29, 1982 in Hollywood, Los Angeles, California, to parents Joanne and Charles Terry Schermerhorn, she is of Dutch, Irish, and Scottish descent on her father’s side, and of Jewish descent on her mother’s side. Brie has an older sister, Lauren Schermerhorn. In 2005, she graduated from the California institute of the Arts and then went to study at the Royal Scottish Academy of Music and Drama in Glasgow, Scotland. In March 2017, Brie married actor Dave Franco after five years of dating. 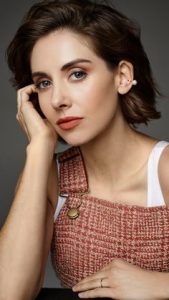 Alison Brie Facts:
*Born on December 29, 1982 in Hollywood, Los Angeles, California, she was raised by divorced parents.
*Her ancestry includes Jewish, Dutch, Irish, and Scottish.
*She used to work as a clown before becoming an actress.
*She is best friends with her Community co-star Danny Pudi.
*Her favorite show is Six Feet Under.
*Follow her on Twitter and Instagram.