Alla Korot is a Ukranian-born American actress and dancer. She is best known for soap opera roles such as Allie Doyle Martin on All My Children, Jenna Norris on Another World, and Stacey Sloan on General Hospital: Night Shift. Korot’s other notable works include The District, Nip/Tuck, Grimm, Bones, Domestic Import, and Fracture. Born on November 1, 1970, in Odessa, Ukraine, to parents Alex and Elena Korot, she and her family immigrated to the US in 1977 and grew up in San Francisco. Korot spent 6 years touring professionally with Ballet Celeste International, and won the California Miss T.E.E.N title at age 17. She married Russian-born Israeli, Yuval Selik in 2010. They have two children. 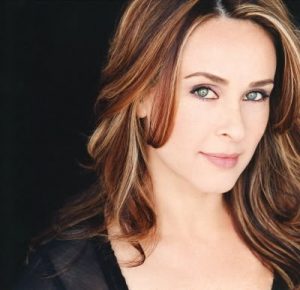 Alla Korot Facts:
*She was born on November 1, 1970, in Odessa, Ukraine.
*She was crowned California Miss T.E.E.N. at 17.
*She and her husband co-launched L’uvalla, an Internet-based skin care business.
*Her hobbies include Snow skiing, horseback riding, bowling, and travel.
*Follow her on Twitter and Instagram.