Allan Hawco is a Canadian actor, writer and executive producer. He is best known for his role as Jake Doyle in the hit CBC television comedy-drama Republic of Doyle as well as Capt. Mick Graham in the drama mini-series ZOS: Zone of Separation, and Solomon Lindo in The Book of Negroes. He is also known for his roles in the television films H₂O and The Trojan Horse. In 2011, Hawco received the Gascon-Thomas Award from the National Theatre School. In 2018 Hawco began starring in the CBC crime drama series Caught. The youngest of four children, Hawco was born in Bell Island, Canada, and was raised in The Goulds in Newfoundland. His father, Michael Hawco, worked on the Bell Island Ferry, and his mother, Mary Hawco, was an elementary school teacher and former nun. He attended National Theatre School in Montreal, Quebec, Canada, and graduated in 2000. Allan started his career working in theatre. In 2012 he married CBC reporter Carolyn Stokes. 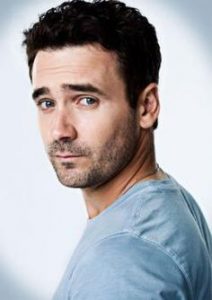 Allan Hawco Facts:
*He was born in Bell Island, and grew up in The Goulds in Newfoundland.
*He is a 2000 graduate of National Theatre School of Canada.
*He holds a red belt in Taekwon Do under Master Scott Downey, 7th Dan.
*In 2011, he received the Canadian Film and Television Hall of Fame’s Outstanding Achievement Award.
*He has his own production company The Company Theatre with Philip Riccio.
*Follow Hawco on Twitter.