Sirusho is an Armenian pop singer and songwriter who began her music career at a young age, and won her first award when she was nine years old for her song “Lusabats”. Sirusho released her debut album, Sirusho, in 2000, followed by her second album, Sheram in 2005. Sirusho became the Armenian spokesperson for the 2007 Eurovision Song Contest and the Armenian representative for the 2008 Eurovision Song Contest held in Belgrade. She represented Armenia with one of her song “Qele-Qele,” which became a hit for Eurovision Song Contest-following fans around the world, especially in Greek-speaking areas. Her 2012 single, “PreGomesh”, achieved remarkable success, and garnered her three World Music Award nominations in 2013. Born Siranush Harutyunyan on January 7, 1987, in Yerevan, Armenia, to an artistic family, her father, Hrachya Harutyunyan is an actor and director, and her mother, Syuzan Margaryan is a famous Armenian singer. She started singing at a young age, and received her first award as a child at the Armenian National Music Awards for her song “Lusabats”. At 7, she began writing her own songs both in Armenian and in English. Following graduation from Yerevan’s Khachik Dashtents School #114 in 2004, she studied piano at the Sayat-Nova Music School and graduated Yerevan State University with excellence in international relations. Since 2009, she has been married to Levon Khocharyan. Together they have two children. 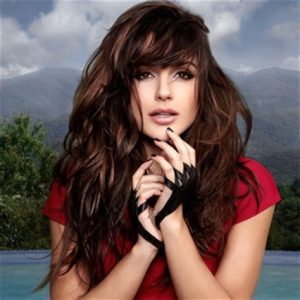 Sirusho Facts:
*She was born in Yerevan, Armenia on January 7, 1987.
*Her mother was one of the most famous singers of Armenian of 1980s.
*She started singing when she was only 10 months old.
*She released her first studio album Sirusho when she was just 13.
*She is the first Armenian artist to be twice-nominated at World Music Awards with her 2012 single “PreGomesh”.
*She was awarded with the title of Honored Artist of Armenia upon the decree of President Serzh Sargsyan in 2017.
*She has her own jewelry line called Pregomesh.
*Visit her official website: www.sirusho.am
*Follow her on Twitter, Facebook, YouTube, and Instagram.