Allyson Felix is an American track and field sprinter who competes in the 100 meters, 200 meters, and 400 meters. At 200 meters, Felix is the 2012 Olympic champion, a three-time World champion, and two-time Olympic silver medalist, and at 400 meters, she is the 2015 World champion, 2011 World silver medalist, 2016 Olympic silver medalist, and 2017 World bronze medalist. Born Allyson Michelle Felix on November 18, 1985 in Los Angeles, California, to parents Paul Felix, an ordained minister, and Marlean Felix, a local elementary school teacher, she has one older brother, Wes, who is also a sprinter and now serving as her agent. Felix attended Los Angeles Baptist High School in North Hills, California, and in 2007 she graduated from USC with a B.A. in elementary education. She’s married to Kenneth Ferguson with whom she has a daughter, Camryn, born in 2018. 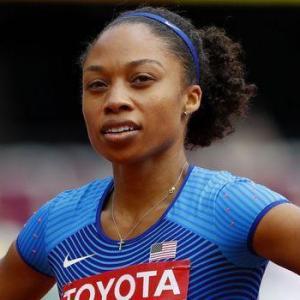 Allyson Felix Facts:
*She was born on November 18, 1985 in Los Angeles, California, USA.
*She is a devout Christian.
*She began playing basketball as a kid.
*She was nicknamed “Chicken Legs” for her lanky physique.
*Her older brother, Wes Felix, is also a sprinter.
*She was named the national girls’ “High School Athlete of the Year” by Track and Field News in 2003.
*She her first Olympic medal at the age of 18 at the 2004 Athens Olympics, winning silver in the 200-meter.
*She won the IAAF female athlete of the year in 2012.
*She is a five-time recipient of the Jesse Owens Award from USATF signifying the Athlete of the Year. (2005, 2007, 2010 and 2012)
*She is coached by Bobby Kersee, husband of track legend Jackie Joyner-Kersee.
*Visit her official website: www.allysonfelix.com
*Follow her on Twitter, Facebook and Instagram.