Alyson Hannigan is an American actress. She is best known for television roles as Willow Rosenberg on Buffy the Vampire Slayer and Lily Aldrin on How I Met Your Mother. She is also known for playing the role of Michelle Flaherty in the American Pie film series. For her work in How I Met Your Mother, she won People’s Choice Awards in 2009 and 2012. Born Alyson Lee Hannigan on March 24, 1974 in Washington, District of Columbia, USA to Emilie Posner and Al Hannigan, she is of Irish descent on her father’s side, and of Jewish descent on her mother’s side. Her parents divorced when she was age two, and she was raised by her mother. She began her acting career in Atlanta at the young age of four in commercials sponsoring such companies as McDonald’s, Six Flags, and Oreos. After graduating from North Hollywood High School in 1992, she attended California State University, Northridge, where she majored in psychology. She made her film debut in My Stepmother is an Alien. She has been married to Alexis Denisof since 2003, together they have two daughters. 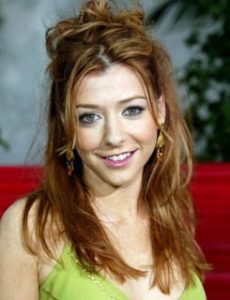 Alyson Hannigan Facts:
*She was born in Washington, D.C. on 24 March 1974.
*Her parents divorced when she was age two.
*She played football until she got an injury in her early teens.
*She is a Godmother of Joss Whedon’s son.
*She was named number 42 on Ask men’s top 99 ‘most desirable’ women of 2012.
*She has a tattoo of tribal dolphins on her ankle, a Japanese kanji on her back, and a cartoon turtle on her left foot.
*Follow her on Twitter.