Amanda Swisten is an former American actress and model. She made her film debut in the 2003 film American Wedding. She also appeared in the films The Last Run, The Girl Next Door and Freezer Burn. She has made guest appearances in a number of television shows such as I’m with Her, Two and a Half Men, Quintuplets, and Joey. She was in the music video of William Hung’s She Bangs as the artist’s “new girlfriend”. Born Mary Bradley on December 20, 1978 in New York City, NY, she belongs to Scandinavian/Slavic descent. She began her career as a model. She wrote a column in Maxim (UK) about serial killers. 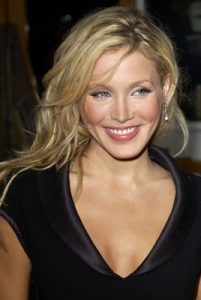 Amanda Swisten Facts
*She was born on December 20, 1978 in New York City, NY, USA.
*She was on a competitive swimming team at age 4.
*She made her acting debut in the 2003 film American Wedding.
*She visited with soldiers in Iraq alongside Dean Cain and Kelly Hu in May 2005.