Amanda Holden is an English actress, singer and presenter who served as a judge on Britain’s Got Talent in 2007. For her performances on the shows Big Top and Wild at Heart, she was nominated for the Laurence Olivier Theatre Award. Born as Amanda Louise Holden in Bishop’s Waltham, Hampshire, England, on February 16, 1971, to Judith Mary Harrison and Frank Holden, her younger sister, Debbie Holden, is a model. She studied acting at The Jellicoe Theatre in Poole. Holden married Chris Hughes on December 10, 2008. The couple have three children named Alexa Louise Florence Hughes, Theo Hughes and Hollie Rose Hughes. She was previously married to Les Dennis from 1995 until their divorce in 2003. 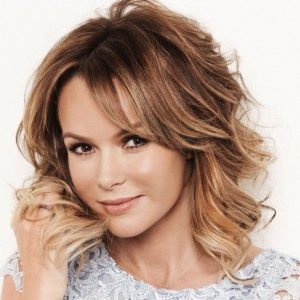 Amanda Holden Facts:
*To be an actress, she trained for 3 years at London’s Mountview Theatre School.
*She became a judge on Britain’s Got Talent in 2007.
*In 2007, she was one of the contestants on Blind Date game show.
*She is the ambassador for “Battersea Dogs and Cats Home”.
*Visit her official website: www.officialamandaholden.com
*Follow her on Twitter, Facebook and Instagram.