Leighton Meester is an American actress, singer and model born in Fort Worth, Texas. She is most famous for her portrayal of Blair Waldorf on The CW’s teen drama series Gossip Girl. Her notable film credits include Killer Movie, The Roommate, That’s My Boy, Country Strong, Monte Carlo, The Oranges, and The Judge. As a model, she has appeared in many campaigns for company Limited Too with fellow actress Amanda Seyfried. She released her first single, “Somebody to Love” in 2009, featuring Robin Thicke. The song was co-written by Meester. The song was released as a digital single by Universal Republic Records on October 14, 2009. Born as Leighton Marissa Meester in Fort Worth, Texas, on April 9, 1986, to Douglas and Constance Meester, she grew up in Marco Island, Florida. She belongs to German, Dutch, English, Irish, Scottish and Welsh descent. She married actor Adam Brody on February 15, 2014. They have a daughter named Arlo Day Brody. 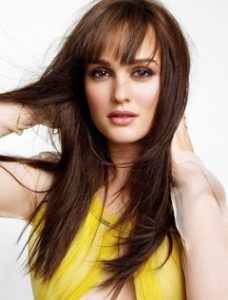 Leighton Meester Facts:
*She became the brand ambassador for Biotherm Skincare in 2013.
*People Magazine named her one of the “100 Most Beautiful” in the World in 2008.
*She served as the spokesperson for Sunsilk in 2008.
*She speaks French fluently.
*She enjoys creative writing.
*Actress Emmy Rossum is her best friend.
*She has a dog named Trudy.
*She has one tattoo, a purple-blue flower with a yellow center, on her left wrist.
*Follow her on Twitter, YouTube, Google+, Facebook and Instagram.