Amanda Peet is an American actress of film, television, and stage. She is known for her roles in television, such as Jack and Jill, Studio 60 on the Sunset Strip, Bent, Togetherness, and Brockmire, and in the films The Whole Nine Yards, A Lot Like Love, 2012 and the 2010 Please Give. Born on January 11, 1972 in New York, USA, to Penny and Charles Peet, she has one older sister who is a doctor. She belongs to English and German and Jewish descent. She is a 1994 graduate of Columbia University. She studied drama at HB Studio in Greenwich Village in New York City. She began her career in the TV industry in 1995. She has been married to David Benioff since September 2006. They have three children: son, Henry, and two daughters, Frances and Molly. 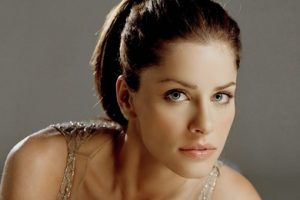 Amanda Peet Facts:
*Her mother is Jewish and her father is a Quaker.
*She studied history at Columbia University.
*In 2002, she was placed at #44 in the list of ‘102 Sexiest Women in the World’ by Stuff magazine.
*She was ranked #87 in FHM magazine’s 100 Sexiest Women in the World 2006 supplement.
*People Magazine named her one of the top 50 Most Beautiful People in the World in 2000.
*She became an advocate for childhood vaccination.
*She is best friends with actress Sarah Paulson.