Model, television personality and actress who first gained recognition for her appearance in Young Jeezy and Kanye West’s “Put On” video in 2008. Rose received further recognition after posing for a Louis Vuitton print advertisement featuring West’s sneaker line. She walked the runway at New York Fashion Week for “Celestino”. She has also made cameos in music videos such as Ludacris’ “What Them Girls Like”, Nicki Minaj’s “Massive Attack”, Young Jeezy’s “Vacation”, Mary Mary’s “God in Me”, and Fabolous “You Be Killin’ Em.” She is also notable for her famous relationships with rappers. In January 2012, Rose released her debut single “Fame”, ft. Wiz Khalifa followed by a second single, titled “Loaded”, in February 2012. She served as a guest judge on Season 3 of RuPaul’s Drag Race. Born Amber Levonchuck on October 21, 1983 in Philadelphia, Pennsylvania, to parents Dorothy and Michael Levonchuck, her father is of Italian and Irish descent and her mother is of Cape Verdean descent. She has one brother named Antonio. She has a son named Sebastian with rapper Wiz Khalifa. She and Khalifa were married for about a year before she filed for divorce in September 2014. She also has a son named Slash with Alexander Edwards. From 2017 to 2018, she dated rapper 21 Savage. 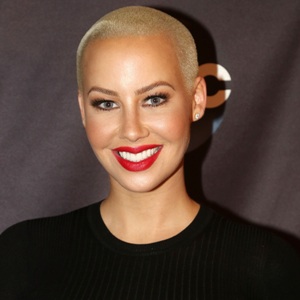 Amber Rose Facts:
*She was born on October 21, 1983 in Philadelphia, Pennsylvania, USA.
*She was raised in South Philadelphia.
*From 2009 to 2010, Rose was signed with modeling agency Ford Models.
*She first shaved her head when she was 19 years old.
*She is friends with Jamie Foxx, Perez Hilton, and Blac Chyna.
*She has two tattoos of Slash, one on her forearm playing the guitar with his trademark hair covering his face and one that she changed from ex-husband Wiz Khalifa’s face on her shoulder.
*Visit her official website: www.muvarose.com
*Follow her on Twitter, Facebook and Instagram.