Minka Kelly is an American actress and model. She is best known for television roles such as Lyla Garrity in Friday Night Lights, Gaby in Parenthood, Eve French in Charlie’s Angels, Valerie Stahl in Almost Human, and Dawn Granger / Dove in Titans, as well as film roles such as Autumn in 500 Days of Summer, Sara Matthews in The Roommate, Joanna Damon in Just Go with It and Jackie Kennedyin The Butler. Born Minka Dumont Kelly on June 24, 1980 in Los Angeles, California, she is the only child of Rick Dufay and Maureen Kelly. She has Austrian, German, French, Irish, English, Scottish, and Dutch, ancestry. Kelly graduated from Valley High School in Albuquerque, New Mexico, in 1998. She was in a relationship with former New York Yankees star Derek Jeter from May 2008 to August 2011. 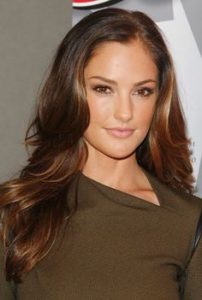 Minka Kelly Facts:
*She was born on June 24, 1980 in Los Angeles, California, USA.
*She is the daughter of Maureen Kelly and Rick Dufay.
*Her mother died in 2008, at age 51, from colon cancer.
*She was named the “Sexiest Woman Alive” by Esquire magazine in October 2010.
*She enjoys cooking and baking.
*She graduated from the New School of Cooking in Culver City, California in 2015.
*Follow her on Twitter, Facebook and Instagram.