Amber Valletta is an American model and actress who began her career as a fashion model. She has appeared sixteen times on the magazine cover of American Vogue. As an actress, she has appeared in films such as Hitch, Transporter 2, Dead Silence, Gamer and Spy Next Door. She had a recurring role as the socialite Lydia Davis on the ABC television prime time soap opera, Revenge. She also served as Oceana’s spokesperson and warned people about the dangers of mercury poisoning. Born Amber Evangeline Valletta on February 9, 1974 in Phoenix, Arizona, USA, to Theresa Malaby, she was raised in Tulsa, Oklahoma. Her father is of Italian and Portuguese descent and her mother is of Cherokee Native American and English roots. She has two half-brothers and three half-sisters. She got her start in the fashion industry when her mother enrolled her in modeling school at the age of 15. She was married to Hervé Le Bihan from 1994 to 1996 and Olympic volleyball player Chip McCaw from 2003 to 2015. She had a son named Auden with Chip McCaw. 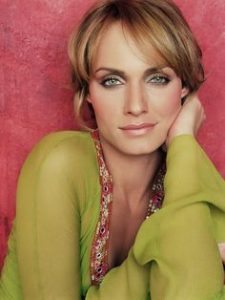 Amber Valletta Facts:
*She was born in Phoenix, Arizona and grew up in Tulsa, Oklahoma.
*She first appeared on the magazine cover of American Vogue at the age of eighteen.
*She is a vegetarian.
*She is a member of the Cherokee Nation in Oklahoma.
*Face of NARS Cosmetics Spring 2010 Collection.
*Follow her on Twitter, Facebook and Instagram.