Donald Driver is a former American football wide receiver who played fourteen seasons in the National Football League. He was picked by the Green Bay Packers in the seventh round of the 1999 NFL Draft with the 213th overall pick. He was selected to four Pro Bowls and helped the Packers win Super Bowl XLV. In May 2012, he won the 14th season of the reality dance competition, Dancing with the Stars. He is also a New York Times bestselling author. He has written three children’s books, Quickie Handles a Loss, Quickie Makes the Team, and Quickie Goes to the Big Game. Born Donald Jerome Driver in Houston, Texas, on February 2, 1975, to Marvin Driver Jr. and Faye Gray, he is the middle child among his five siblings. His parents got divorced when he was just a young boy. Donald was homeless during parts of his childhood and had to use a U-Haul truck for shelter. He is married to Betina Jackson with whom he has three children; Cristian, Christina and Charity. 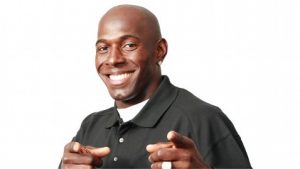 Books: Driven: From Homeless to Hero, My Journeys On and Off Lambeau Field, Status Quo Vadis: A Play in Two Acts

Donald Driver Facts:
*He was born on February 2, 1975, in Houston, Texas, USA.
*He started his professional career in 1999.
*He played college football for Alcorn State University.
*Visit his official website: www.donalddriver80.com
*Follow him on Twitter and Facebook.