Amy Fadhli is an American fitness model and actress, who won the Fitness America National Champion 1996. She was also featured in the August 1996 issue of Playboy magazine. In addition being a fitness model, she is also an actress and has made appearances in many television shows such as The Young and the Restless and numerous films. Born Amahl Najia Fadhli on January 30, 1965 in Galveston, Texas, USA, she is the daughter of Iraqi surgeon father and a Czech artist mother. She began her career as a model, participating in several swimsuit contests. She is married to Tito Raymond. They have one child together. 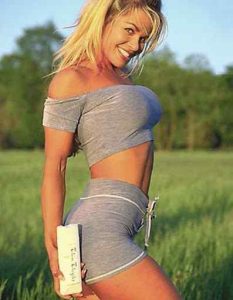 Amy Fadhli Facts:
*Her father was a cardiovascular surgeon, and her mother is a sculptor and breeder of Arabian horses.
*She is the winner of the Fitness America National Champion 1996.
*She spent about a year in the Middle East.
*Follow her on Facebook and Instagram.