Actress Amy Madigan is best known for her role as Sunny Mackenzie-Sobel in the 1985 film Twice in a Lifetime, for which she was nominated for the Golden Globe Award for Best Supporting Actress – Motion Picture and the Academy Award for Best Supporting Actress. She has also starred in the films Field of Dreams, The Dark Half, Pollock, Gone Baby Gone, Places in the Heart, Uncle Buck and Love Child. For her portrayal of Sarah Weddington in the 1989 television film Roe vs. Wade, she earned her a Golden Globe Award for Best Supporting Actress on Television. Born Amy Marie Madigan in Chicago, Illinois, she is the daughter of Dolores Madigan and John Madigan. She has two brothers, Jim and Jack. She attended and graduated from Marquette University with a degree in philosophy. She has been married to Ed Harris since 1983. They have one daughter, Lily Dolores Harris born in 1993. 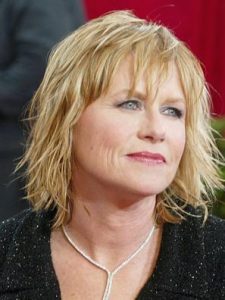 Amy Madigan Facts:
*Her father, John Madigan, is a well-known journalist, and a noted Chicago area lawyer.
*She studied piano at the Chicago Conservatory of Music.
*She sang and played piano in a rock band before she started acting.
*She studied acting alongside actor Lee Strasberg.
*She posed nude for the June 1978 issue of Playboy and covered in jelly, to promote her band, Jelly.