Amy Seimetz is an American actress, producer, director, editor, and writer. She is known for the television work on series such as The Killing (2013–2014), Family Tree (2013), and Junior (2016). She starred in the 2013 American experimental science fiction film Upstream Color. Amy made her feature directorial debut in 2012 with the Florida-based thriller Sun Don’t Shine, which she also wrote, produced, and co-edited. Born Amy Lynne Seimetz on November 25, 1981, in Florida, USA to parents Sharlene A. (Kutchman) and Michael F. Seimetz, her ancestry includes Ukrainian, German, Irish, Croatian, Slovenian and English. She moved to Los Angeles and worked as a nanny, a waitress and a seamstress while learning filmmaking. She began her film career by producing and directing short and independent films, including Barry Jenkins’ Medicine for Melancholy. In 2013, Amy became engaged to filmmaker Shane Carruth. 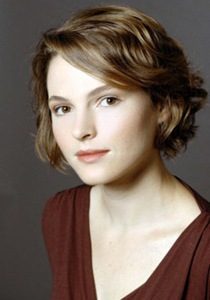 Amy Seimetz Facts:
*She was born on November 25, 1981, in Florida, United States.
*She was raised in Tampa-St. Petersburg, Florida.
*She worked as a nanny, a waitress, and a seamstress while learning the business of filmmaking.
*Since 2013, she has been engaged to filmmaker Shane Carruth.
*Follow her on Twitter.