American former competitive swimmer, Olympic champion, former world record-holder, and national radio sports talk show co-host who won six Olympic gold medals in her career, four of these medals at the 1996 Summer Olympics, making her the first American woman to do so. She won the 50-meter freestyle, 100 butterfly, 4×100 freestyle and the 4×100 medley. She retired from swimming after the 2000 Olympics. Born Amy Deloris Van Dyken on February 15, 1973 in Denver, Colorado, to parents Becky and Don Van Dyken, she has a sister Katie and brother David. Following her high school graduation, Van Dyken attended the University of Arizona for two years before transferring to Colorado State University, where she broke her first (of many more to come) United States record with a time of 21.77 seconds in the 50-yard freestyle at the NCAA championships in 1994. On March 10, 2001, Van Dyken married former NFL punter Tom Rouen. She was previously married to Alan McDaniel from 1995 to 1998. 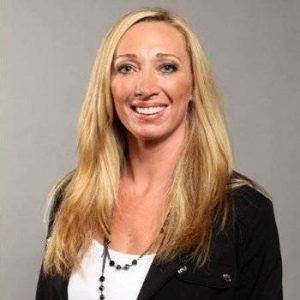 Amy Van Dyken Facts:
*She was born on February 15, 1973 in Denver, Colorado, USA.
*She suffered from severe asthma throughout her childhood and into adulthood.
*She began swimming on the advice of a doctor as a way to strengthen her lungs to cope with her condition and prevent future asthma attacks.
*She broke the U.S. record in the 50-yard freestyle at the 1994 NCAA championships.
*She became the first American female athlete to win four gold medals in a single Games at the 1996 Summer Olympics.
*She was named Swimming World’s American Swimmer of the Year in 1995 and 1996.
*Her spine was severed in an ATV accident in June 2014.
*She is now paralyzed below the waist.
*Visit Amy Van Dyken Foundation: www.amyvandyken.org
*Follow her on Twitter and Instagram.