Ana De La Reguera is a Mexican actress born in Veracruz. She is best known for her role as Sister Encarnación in the 2006 film Nacho Libre. She is also known for her appearances in the HBO comedy Eastbound & Down, where she played Vida on season 2. She has starred in such telenovelas as Pueblo chico, infierno grande (as Priscila), The Blacklist (as Vanessa Cruz), and Por tí (as María Aldana). She was born to Nena de la Reguera and Augusto Gardoqui, in Veracruz, Mexico, on April 8, 1977 as Anabell Gardoqui De La Reguera. She has one sister, Alicia. 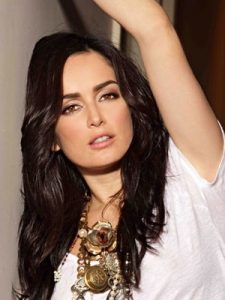 Ana De La Reguera Facts:
*She began her career with her role in the telenovela Azul (1996).
*Her mother was a Miss Veracruz.
*She portrayed the role of Lorena Guerra in the HBO series Capadocia.
*She hosted the MTV Video Music Awards Latin America in 2006.
*Visit her official website: www.anadelareguera.net
*Follow her on Twitter, Facebook and Instagram.