Andrea Brillantes is a Filipina child actress. She is best known for her portrayal of Annaliza Querubin / Julie Benedicto in the 2013 primetime series Annaliza, for which she earned the 27th PMPC Star Awards 2013 in Best Child Performer. She has also appeared in a number of popular TV series such as Alyna, Hawak Kamay, Istorifik: Kwentong Pidol’s Fanstastik and E-Boy. For her role as Lorraine “Lorry” Magpantay-Agustin in the family drama TV series Hawak Kamay, she won the Yahoo! Celebrity Awards in the category of Child Star of the Year. Her films include MomZillas, Crazy Beautiful You, Everyday I Love You, and Ang Dalawang Mrs. Reyes. Born Anndrew Blythe Daguio Gorostiza on March 12, 2003 in Taytay, Rizal, Philippines, to Mabel and Byron Gorostiza, she has one older sister named Kayla. She made her acting debut with the children’s comedy show Goin’ Bulilit in 2010. 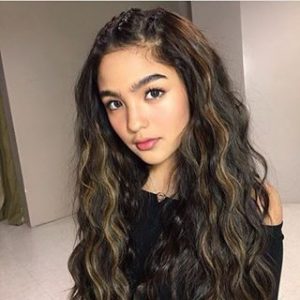