Andréa Burns is an American actress and singer, best known for originating the role of hairdresser Daniela in the Broadway production of Lin-Manuel Miranda’s “In The Heights”. She portrayed Carmen in Douglas Carter Beane’s The Nance, and Mrs. Spamboni in the 2009 version of The Electric Company. She is also known for originating the role of Gloria Fajardo in the musical On Your Feet!. Burns’sother television credits include Marvel Comics’s Jessica Jones on Netflix, Kevin Can Wait, Sky Dancers, Law & Order: SVU, Rescue Me, Blue Bloods, and Wonder Pets. Andrea starred as “Lenora” in the 2015 film Akron. 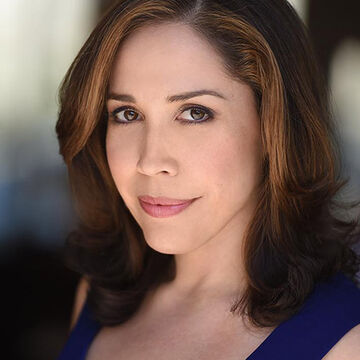 Andrea Burns Facts:
*She was born on February 21, 1971 in Miami Beach, Florida, to a Jewish father and a Venezuelan mother.
*She began her career touring the opera houses of Europe as Maria in West Side Story at age 18.
*Her début solo album A Deeper Shade Of Red was described by Playbill as “superb on all counts!”
* In 2006, “100 Stories,” a single she co-wrote with her brother, music producer Mike Burns, peaked at #2 on the 2006 Billboard Hot Dance Club Play charts.
*She originated the role of Daniela in the Broadway production of Lin-Manuel Miranda’s “In The Heights”.
*She is married to New York City–based director, producer, and teacher Peter Flynn. They have one son named Hudson.
*Visit her official website: www.andreaburns.com