Andy Murray is a British professional tennis player who won the Gold Medal in the 2012 and 2016 Men’s Tennis Olympics. He also won the 2012 US Open and the 2013 and 2016 Wimbledon Opens. He became the first British man in 77 years to win the British Open when he defeated Novak Djokovic in 2013. He turned professional in 2005. Murray was born as Andrew Barron Murray in Glasgow, Scotland, the son of Judy Murray and William Murray. He has an elder brother named Jamie, is also a professional tennis player. He has been married to Kim Sears Murray since April 11, 2015. They have a daughter, Sophia. 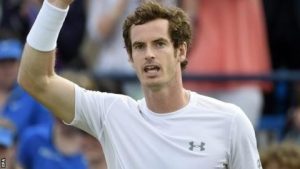 Andy Murray Facts:
*His parents separated when he was ten years old.
*He is the younger brother of tennis doubles player Jamie Murray and son of coach Judy Murray.
*He is a supporter of Hibernian Football Club.
*Follow him on Twitter, Facebook, YouTube, Google+, and Instagram.