Angela Kinsey is an American actress. She is best known for her role as Angela Martin in the NBC television series The Office. She also played a recurring role on the TBS comedy Your Family or Mine and in the Netflix series Haters Back Off. Kinsey’s other notable works include New Girl, Bad Judge, Celebrity Name Game, and The Real O’Neals. Born Angela Faye Kinsey on June 25, 1971 in Lafayette, Louisiana, USA, Kinsey was raised from the age of 2 in Jakarta, Indonesia where she attended the Jakarta International English School and learned to speak Indonesian. She studied English at Baylor University and graduated in 1993. She married Warren Lieberstein in 2000, and they had a daughter named Isabel in 2008 before getting divorced in 2010. In 2016, she married Joshua Snyder. 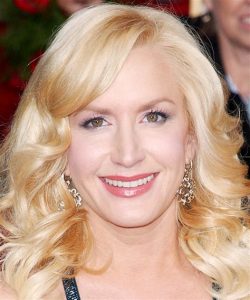 Angela Kinsey Facts:
*She was born on June 25, 1971 in Lafayette, Louisiana, USA.
*Her family moved to Jakarta, Indonesia when Angela was 2.
*Her family returned to the US and settled in Archer City, Texas.
*She was a member of the Chi Omega sorority while at Baylor University.
*She is Presbyterian and attends Bel-Air Presbyterian Church.
*She worked as an intern for Max Weinberg on Late Night with Conan O’Brien in 1994.
*Kinsey was the spokeswoman for the Clairol brand of hair products.
*She loves tacos and the outdoors.
*Follow her on Twitter, Facebook and Instagram.