Angela Sarafyan is an Armenian American actress. She is known for her roles in television, such as Westworld, The Good Guys, In Plain Sight, and Sex Ed: The Series, and in the films The Twilight Saga: Breaking Dawn – Part 2, The Informers, A Good Old Fashioned Orgy, Lost & Found in Armenia, The Immigrant, Paranoia, 1915, Me Him Her and the 2016 The Promise. She has made guest appearances in a number of television series such as Judging Amy, Buffy the Vampire Slayer, The Shield, Cold Case, South of Nowhere, The Division, 24, Criminal Minds, CSI: NY, Nikita, Blue Bloods and The Mentalist. Born on June 30, 1983 in Yerevan, Armenian, to Zarmine and Grigor Sarafyan, she moved with her parents to the US when she was four years old. She was educated at Francisco Bravo Medical Magnet High School located in Boyle Heights, Los Angeles, California. She made her television debut in 2000 playing the role of Aisha Al-Jamal in the episode Culture Clash in the CBS drama Judging Amy. 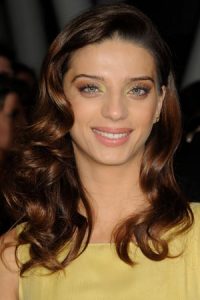 Angela Sarafyan Facts:
*She was born on June 30, 1983 in Yerevan, Armenian.
*She belongs to Armenian descent.
*Her father is an actor and her mother is a painter.
*As a child, she did ballet and played piano.
*She is a huge fan of the cartoon series Tom and Jerry.
*She is a big fan of Greek-American actor, film director, and screenwriter John Nicholas Cassavetes.
*Visit her official website: www.angela-sarafyan.com
*Follow her on Twitter and Instagram.