Avril Lavigne is a Canadian singer and songwriter whose debut album, “Let Go,” went 6x platinum, and was nominated for eight Grammy Awards. She has sold over 40 million albums and more than 50 million singles worldwide, making her the third-best-selling Canadian female artist of all time, behind Shania Twain and Celine Dion. Her debut single, “Complicated”, won her the MTV Video Music Award for Best New Artist in a Video in 2002. Outside music, she provided the voice of Heather in the 2006 animated film Over the Hedge, and made her screen acting debut in the 2006 American-British drama film, Fast Food Nation. Born Avril Ramona Lavigne on September 27, 1984 in Belleville, Ontario, Canada, to parents Judith-Rosanne Loshaw and Jean-Claude Lavigne, she spent most of her growing years in Napanee, Ontario. She is the middle child of three, with an older brother named Matthew and younger sister named Michelle. She is of French-Canadian descent on her father’s side, and of English, Scottish, and German descent on her mother’s side. She began singing at the age of 2 and, signed with Arista Records in 2000. She was married to Deryck Whibley from 2006 to 2010 and Chad Kroeger from 2013 to 2015. 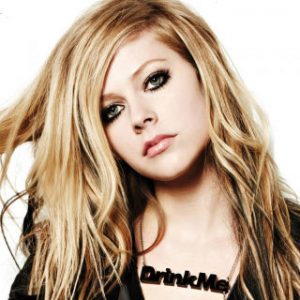 Avril Lavigne Education:
She dropped out of high school after the 11th grade when she secured a record deal.

Avril Lavigne Facts:
*She was born on September 27, 1984 in Belleville, Ontario, Canada.
*She began singing in church at the age of 2.
*She taught herself the guitar at age 12.
*She released her debut album, Let Go” on June 4, 2002.
*Her hit single “Complicated”, peaked at #1 in Australia and #2 in the US.
*She has dual citizenship of Canadian and French.
*She was named #74 in the 2011 FHM list of “100 Sexiest Women in the World”.
*She is a fan of American rapper Eminem.
*She launched the clothing line Abbey Dawn in July 2008.
*Visit her official website: www.avrillavigne.com
*Follow her on Twitter, Facebook, YouTube and Instagram.