Angelina Jolie is an American actress and filmmaker who has starred in such films as Girl, Interrupted, Salt, Maleficent, George Wallace, Wanted, A Mighty Heart, Gia, Changeling, The Tourist, Lara Croft: Tomb Raider, and Mr. & Mrs. Smith. She is the recipient of various accolades including; an Academy Award, three Golden Globe Awards, and two Screen Actors Guild Awards. Born Angelina Jolie Voight on June 4, 1975 in Los Angeles, California, she is the daughter of actors Jon Voight and Marcheline Bertrand. She is of German and Slovak descent on her father’s side, and of French Canadian, Dutch, and German descent on her mother’s side. Jolie made her screen debut as a child in the comedy film Lookin’ to Get Out (1982), alongside her father, Jon Voight, and played her first leading role in the 1993 movie Cyborg 2. She has been married to Jonny Lee Miller, Billy Bob Thornton and Brad Pitt. 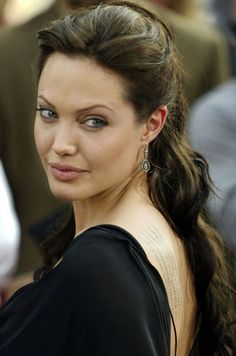