Jennifer Lawrence is an American actress, best known for her starring role as Katniss Everdeen in the Hunger Games film series and as the mutant Mystique / Raven Darkhölme in the X-Men film series. She has also starred in such films as Winter’s Bone, Joy, Red Sparrow, Silver Linings Playbook, Passengers and American Hustle. Her accolades include one Academy Award, one BAFTA Award, three Golden Globe Awards, four Critics’ Choice Awards, two Screen Actors Guild Awards, seven MTV Movie Awards, five People’s Choice Awards, and eight Teen Choice Awards. Born Jennifer Shrader Lawrence on August 15, 1990 in Indian Hills, Kentucky, she is the daughter of Gary and Karen Lawrence. She has two older brothers, Blaine and Ben, and has German, as well as English, Irish, and Scottish, ancestry. She graduated from high school with a 3.9 GPA in two years. Lawrence was discovered at age 14 by a talent scout while vacationing in New York City with her family. In 2018, she started dating art gallery director Cooke Maroney. They became engaged in February 2019, and married in Rhode Island on October, 19 2019. She was previously in a relationship with X-Men co-star Nicholas Hoult, Coldplay frontman Chris Martin, and director Darren Aronofsky. 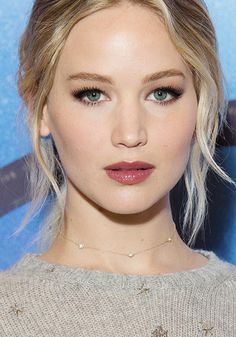 Jennifer Lawrence Facts:
*She was born on August 15, 1990 in Indian Hills, Kentucky, USA.
*She is of English, Scottish, Irish and German descent.
*Growing up, she wanted to be a doctor.
*She used to work at her mother’s day camp as an assistant nurse.
*In 2013, she won an Oscar for her role in ‘Silver Linings Playbook.’
*She was the highest-paid actress in the world in 2015 and 2016.
*In 2017, she was the third highest paid actress with $24 million.
*She is a fan of Marion Cotillard.
*She is left-handed.
*Follow her on Facebook and Instagram.