Angeline Malik is a Pakistani director, producer, actor, model, host and activist who won the Lux Style Awards in 2006 for best director and a nomination for best actress. She is known for television roles such as Sitamgar, Akhri Barish, Kadoorat, and Dil, Diya, Dehleez. The shows Malik has directed include “Kitni Girhain Baqi Hain”, “La Hasil”, Kabhi Band Kabhi Baja, “Raja Banay Batein”, and “Dil jala hay”. She is also known as a producer, working under the banner of Angelic Films. Born on March 28, 1975 in London, United Kingdom, to parents Anees Khan Malik and Aslam Khan Malik, she spent her initial childhood in England and then shifted to Islamabad. Her siblings are Arshad, Amberine, and Alvera. She earned her master’s degree in computer imaging and animation from London Guildhall University. 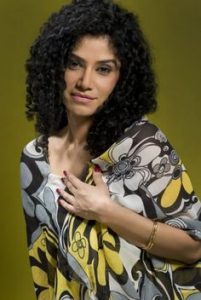 Angeline Malik Facts:
*She was born on March 28, 1975 in London, United Kingdom.
*She started her career as a model.
*She has her own production company, Angelic Films.
*She is the founder of movement #inkaarkaro which is a campaign against suppression of men, women and children.
*Follow her on Twitter, Facebook and Instagram.