Anita Barone is an American actress. She is best known for television roles as Karen Foxworthy on The Jeff Foxworthy Show, Linda Woods on Daddio, Georgia Jones on Shake It Up, Vicky Gold on The War at Home, and Carol Willick on Friends. She has also played prominent roles in the films Running Time, The Rosary Murders, The Takeover, and One Last Ride. She received the 2005 Methodfest Best Supporting Actress Award for her work in feature film, One Last Ride. Born Anita Louise Barone on September 25, 1964 in St. Louis, Missouri, she earned her BFA from the University of Detroit Mercy, and MFA from Wayne State University. She is married to actor Matthew Glave. They have two daughters together. 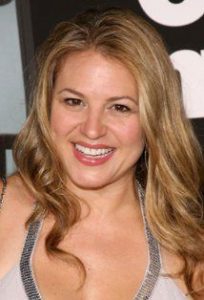 Anita Barone Facts:
*She was born on September 25, 1964 in St. Louis, Missouri, USA.
*She starred as Vicky Gold in the Fox sitcom The War at Home from 2005–2007.
*She played Georgia Jones in the Disney Channel TV series Shake It Up from 2010–2013.
*She currently resides in Los Angeles with her family.
*Follow her on Twitter and Instagram.