Anna Belknap is an American actress. She is best known for her portrayal of Detective Lindsay Monroe Messer on CSI: NY. She played Eva Rossi in the American medical drama television series Medical Investigation. Born Anna C. Belknap on May 22, 1972 in Damariscotta, Maine, to Louise and David Belknap, her first television role was on the series Homicide: Life on the Street in 1996. She attended American Conservatory Theater for Fine Arts degree. She married Eric Siegel in 2004. They have two children. 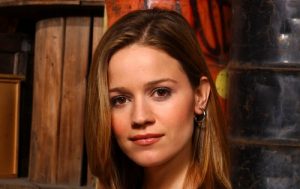 Anna Belknap Facts:
*She earned her B.A. from Middlebury College in Vermont, and a masters in Acting from the American Conservatory Theater.
*She is a member of the Rude Mechanicals Theater Co. in New York City.
*Her favorite colors are blue and green.
*Follow her on Facebook.