Anna Kooiman is an American television host and lifestyle blogger who works for Australia’s Network Ten. She is best known for her work with Fox News Channel based in New York City, where she served as anchor and reporter from 2011 to September 2016. Outside of her television hosting duties, she pursued a career as a North Carolina-based fitness trainer. She was born Anna Brooks Kooiman on February 7, 1984 in Charlotte, North Carolina to Wally Kooiman and Susan Kooiman. She is the youngest child in her parents. She has an older brother, Michael Kooiman. She belongs to Dutch descent. She was educated at Myers Park High School and University of North Carolina. She is married to Tim Stuckey. 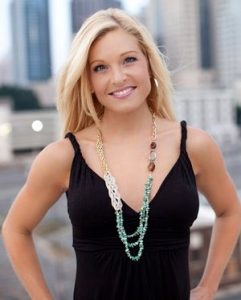 Anna Kooiman Facts:
*She is of Dutch ancestry.
*She played softball while in high school.
*She ran in the 2014 Boston Marathon on April 21, 2014.
*She is AFAA and Turbo Kick-certified.
*She was named Queen of the 2016 Azalea Festival in Wilmington, North Carolina.
*She has appeared on the cover page of Carolina Health & Fitness magazine.
*She has a yellow Labrador retriever named “Baxter”.
*Follow her on Twitter, Facebook and Instagram.