English actress Gabrielle Anwar is best known for her role as Fiona Glenanne on American television series Burn Notice, and as Princess Margaret Tudor on The Tudors. Gabrielle was born on February 4, 1970 in Laleham, England, to Tariq Anwar and Shirley Hills. Her father was born in Delhi, in India, to an Austrian Jewish mother and an Indian father. Her mother is English. She made her acting debut in the British miniseries Hideaway, and made her film debut in Manifesto. She and actor Craig Sheffer had a daughter, Willow in 1993, before separating (1988 to 1995). She later married John Verea and they had two children before divorcing. In 2015 she married Shareef Malnick. 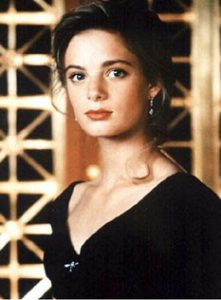 Gabrielle Anwar Facts:
*She is the daughter of Tariq Anwar, a film editor, and Shireen Anwar, an actress.
*She moved to Los Angeles with American actor Craig Sheffer at the age of 19.
*She had a four-year relationship in her late teens with drummer Jed O’Brien.
*She became American citizenship in 2008.
*One of People magazine’s 50 Most Beautiful Women in the World in 1994.
*In 1997, she was named no. 82 in 1996 and no. 79 in FHM’s 100 Sexiest Women in the World editions.
*She was kicked out of school in England for fighting.
*Follow her on Twitter.