Anna Paquin is a Canadian-New Zealand actress born in Winnipeg, Canada. She is best known for playing the role of Sookie Stackhouse in HBO’s True Blood from 2008 to 2014. For her role as Flora McGrath in the 1993 film The Piano, she received the Academy Award for Best Supporting Actress at the age of 11. She played mutant superheroine Rogue in The X-Men Series. Her other notable performances include: The Squid and the Whale, Margaret, Fly Away Home, Scream 4, Roots, and Bury My Heart at Wounded Knee. Born Anna Helene Paquin on July 24, 1982 in Winnipeg, Manitoba, Canada to Mary and Brian Paquin, she moved with her family to New Zealand when she was 4. She has two older siblings, a brother named Andrew, a film producer, and a sister, Katya. She landed her first film role at the age of 9. In August 2010, she married Stephen Moyer, her True Blood co-star. They have twins named Poppy and Charlie. 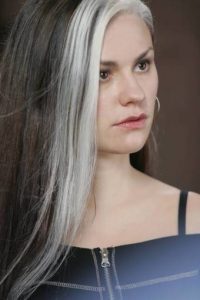 Anna Paquin Facts:
*Born on 24 July 1982 in Winnipeg, Canada, she belongs to French-Canadian, Irish, English, and Dutch descent.
*She competed in gymnastics, ballet and swimming while growing up.
*She is fluent in French.
*She is openly bisexual.
*She used to play the cello.
*She was classmates with Julia Stiles when she was in Columbia University.
*She is a fan of the alternative rock band Nine Inch Nails and The Beatles.
*Teen People Magazine named her one of the top 25 Hottest Stars under 25 in the World in 2002.
*She ranked #51 in the 2011 FHM Australia’s 100 Sexiest Women in the World edition.
*She was named No. 50 in 2008 and No. 84 in 2010 in Maxim magazine’s Hot 100 Women list.
*She was ranked #78 on Maxim’s “Hot 100” of 2014 list.
*Follow her on Twitter and Instagram.