Samskruthy Shenoy is an Indian film actress who appeared mainly in Malayalam, Telugu, Tamil and Kannada films. She is known for her roles in the films Black Butterfly, Vegam, Kaadu, Sethu Boomi, Vil Ambu and Happy Birthday. Born on November 20, 1998 in Kochi, India, to Dr.Govindan Shenoy and Vidya, Samskruthy attended at Saraswathi Vidyanikethan Public School in Kochi. She began her career as a model of Lukmance Model Management agency. In 2013, she landed her first main role in the Telugu film, Hrudayam Ekkadunnadi. In 2018, she married her long-time boyfriend, Vishnu Nair. 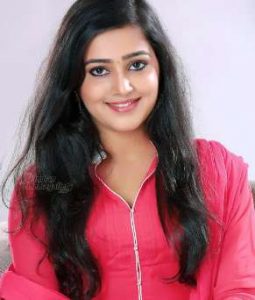 Samskruthy Shenoy Facts:
*She was born in Kochi, India on November 20, 1998.
*She is a trained dancer who has learned Bharatnatyam, Mohiniyattom and western dance.
*She was engaged to her longtime boyfriend Vishnu Nair in July 2017. They married in 2018.
*Follow her on Facebook.