Anson Mount is an American actor. He is best known for television roles as Cullen Bohannon on Hell on Wheels, Jim Steele on Conviction, Roy Ravelle on Line of Fire, Black Bolt on Marvel’s Inhumans, and Captain Christopher Pike in season 2 of Star Trek: Discovery. His film credits include Tully, Crossroads, The Warrior Class, Hood of Horror, The Two Mr. Kissels, Seal Team Six: The Raid on Osama Bin Laden, Mr. Right, and Visions. Born Anson Adams Mount IV on February 25, 1973 in Mount Prospect, Illinois, to parents Nancy and Anson Adams Mount II, he was raised in White Bluff, Tennessee. He has a sister named Kristin and a brother named Anson. He was educated at Dickson County High School in Dickson, Tennessee, Sewanee: The University of the South, and Columbia University. In 2018, he married his longtime girlfriend, photographer Darah Trang. 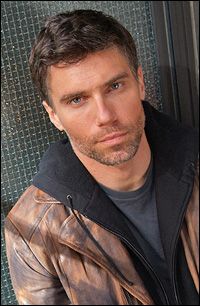 Anson Mount Facts:
*He was born on February 25, 1973 in Mount Prospect, Illinois, USA.
*His mother was a professional golfer and his father was an editor for Playboy magazine.
*He graduated in 1995 from the University of the South, Sewanee, Tennessee.
*He took acting classes at Michael Howard Studios in New York City.
*During his teens, he did part time job at the local golf shop.
*He was a member of Lambda Chi Alpha Fraternity.
*Follow him on Twitter, Facebook and Instagram.