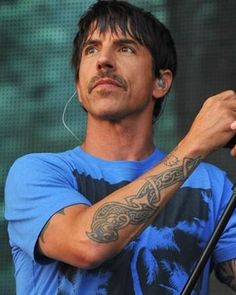 Born on November 1, 1962 in Grand Rapids, Michigan, he is the son of actor Blackie Dammett aka John Kiedis. Kiedis’ great grandfather, Anton Kiedis, was Lithuanian and his father’s mother has some Mohican blood. He has dated many women, including Jessica Stam, Heidi Klum, and Heather Christie, with whom he had a son named Everly.

Anthony Kiedis Facts:
*He was born on November 1, 1962 in Grand Rapids, Michigan, USA.
*His parents split when Anthony was three years old.
*Lead vocalist of the hugely successful alternative rock band Red Hot Chili Peppers, which have won 7 Grammy awards and sold more than 60 million albums worldwide.
*He is known for his on stage charisma and high sex appeal within the band and the public.
*He released a memoir book called Scar Tissue in 2004.
*He enjoys watching movies.
*He visited India in 1996 where he met the Dalai Lama.
*He was named “Sexiest Male Vegetarian Alive” in 2008 by PETA.
*Visit his band’s official website: www.redhotchilipeppers.com