Charlie Hunnam is a British actor and screenwriter. He is best known for his portrayal of Jackson “Jax” Teller on the FX series Sons of Anarchy, for which he was twice nominated for the Critics’ Choice Television Award for Best Actor. Hunnam is also notable for his roles as Lloyd Haythe on the Fox series Undeclared and Nathan Maloney in the Channel 4 drama Queer as Folk. His notable film appearances include: Nicholas Nickleby, Green Street, Pacific Rim, The Lost City of Z, Papillon, King Arthur: Legend of the Sword and The Gentlemen. 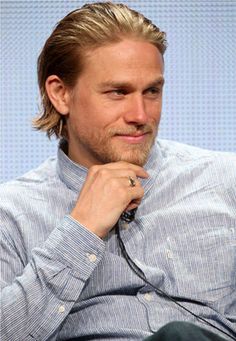 Born Charles Matthew Hunnam on April 10, 1980 in Newcastle upon Tyne, United Kingdom, to parents Jane and William Hunnam, he is of English, 1/8th Irish, and some Scottish descent. Hunnam was discovered by a production manager for the British children’s show Byker Grove while goofing around in a shoe store. He was married to actress Katharine Towne from 1999 to 2002. He has been dating artist Morgana McNelis since 2007.

Charlie Hunnam Facts:
*Born on April 10, 1980 in Newcastle upon Tyne, United Kingdom, he is the second oldest of four boys.
*His parents got divorced when he was two years old.
*Growing up, he played rugby a lot.
*He was voted #9 in Elle Girl’s list of the top 100 sexiest men of 2005.
*He played Jackson “Jax” Teller in the FX drama series Sons of Anarchy from 2008 to 2014.
*His favorite actors are Daniel Day-Lewis and Sean Penn.
*He began training in Brazilian Jiujitsu in 2016 and earned a Blue Belt two years later.
*He’s dyslexic.
*He is friends with Jamie Bell, Anne Hathaway and Romola Garai.
*He divides his time between Los Angeles and London.