Apu Biswas is a Bangladeshi film actress born in Bogra. With numerous awards to her credit, Apu Biswas is one of the top names in Dhallywood. Her accolades include two Bachsach Awards, one BCRA Award, one CJFB Award, one Ifad Film Club Award, and one Glamour Award. She was nominated five times for the Meril Prothom Alo Awards. She has starred in such films as 2009’s Jaan Amar Jaan, 2006’s Koti Takar Kabin, 2007’s Dadima, 2013’s Devdas, and 2013’s My Name Is Khan. She played Moyna in the 2014 film Dui Prithibi. Her first role was in the 2006 film Kal Sokale. Apu Biswas was born on October 11, 1989 in the town of Bogra, Bangladesh, the daughter of Upendronath and Shefali Biswas. She has been married to actor Shakib Khan since 2008. They have a son together. 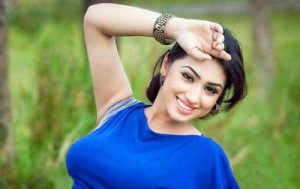 Apu Biswas Facts:
*She was born into a Hindu family in the town of Bogra.
*She is one of four children of her parents.
*While growing up, she studied dancing at Bulbul Lolitokola Academy.
*She has co-starred with Shakib Khan in many of her films.
*Follow her on Facebook.