Ari Melber is a journalist who serves as Chief Legal Correspondent for MSNBC, covering the Justice Department, Supreme Court, FBI and legal issues on air and for msnbc.com. As a guest host, he also serves for shows such as “The Rachel Maddow Show,” “The Last Word with Lawrence O’Donnell,” and “Hardball.” He also began writing political columns for several news outlets like The Nation, The Atlantic, Reuters, and Politico. He has been a featured speaker at Oxford, Harvard Law School, Yale,Harvard’s Kennedy School of Government, the Columbia University Political Union, Georgetown University, USC, NYU, The Center for American Progress, Alpha Phi Alpha, the Lawyers Committee for Civil Rights Under Law, and several state bar associations. Ari was born on March 31, 1980 in Seattle, Washington, USA. 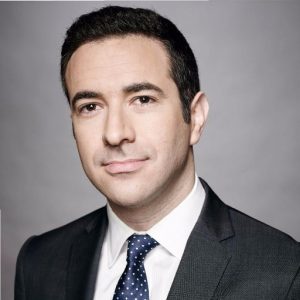 Ari Melber Facts:
*He is an Emmy Award-winning journalist, writer and attorney.
*He practiced law at a major New York law firm, specializing in First Amendment, reporter’s privilege and copyright litigation from 2009 to 2013.
*He is a member of the New York Bar.
*Follow him on Twitter, Facebook and Instagram.